Here at Fantasy Book Critic, we love Michael J. Sullivan's books a lot.  Cindy and Liviu originally became his fans when they discovered his work when Michael had self-published his Riyria series. Since then Michael has newer heights as evidenced by his move to traditional publishing & kickstarter success last year (He now hold the record for the most successful kickstarter for a fantasy work). So this year Michael and Dabel Brothers Publishing are back with a graphic novel adaptation for The Death Of Dulgath.

Michael was kind enough to answer a few questions about this lovely project and my thanks to Ernst Dabel for helping set this up. So read ahead to find out why this is such a fascinating project and why you ought to back it!

Q] Hi Michael, welcome to Fantasy Book Critic. Previously you ran the super successful Kickstarter for The Death Of Dulgath. It was successful beyond everyone's imagination and I believe was the most successful campaign for a fantasy book. Please tell us what lead you to go this route? What was your experience in running it so successfully and taking it all the way?

MJS: The Death of Dulgath was an unusual book from a publication standpoint. I had just signed a 4-book deal with Del Rey for my Legends of the First Empire series and the non-compete of that contract could have limited any Riyria publications until 2020…unless I could get a book written and released by December 2015. Considering I didn’t start writing the book until May, self-publishing was the only option for that title.

Generally, self-publishing means ebooks and print-on-demand trade paperback copies. But I (and my readers) wanted hardcover editions of my books. To switch to that format would require:
(a) a print run
(b) a warehouse to store the books
(c) a distribution partner.

A small press run would have cost $15,000 and a larger one would come in around $30,000. On top of those costs were cover design, editing, layout, and ebook translation. Since I use the tops in the field that would add another $5,000 or so. I could easily cover $5,000 in production costs but $20,000 to $35,000 was beyond my ability. Kickstarter was designed for exactly that kind of situation. When an entrepreneur doesn’t have enough up-front cash for a project, they present their case to the public at large and if they think it’s worth doing, they pre-order copies to fund the project. If the Kickstarter hadn’t funded, the book would have still been produced, I just wouldn’t have been able to have hardcover editions.

We funded the $26,000 for the hardcover edition in less than 48 hours and the project kind of took on a life of it’s own. We weren’t out “beating the bushes” to find people to back the project. In fact, we were actively not promoting it as fulfilling all the orders was looking to be pretty monumental. Robin, my wife, was running the project and she ended up shipping about 2,400 pounds of books. That’s more than a ton! So, while I would like to say that we worked some kind of “marketing magic” for the Kickstarter the reality is we were offering a product that people wanted, and provided some add-ons that were really desirable and the rest pretty much took care of itself.

Q] Now a year later, you are back with another Kickstarter for the graphic novel adaptation of the same story along with Dabel Brothers Publishing. Please tell us how did its inception occur?

MJS: I’m a huge graphic novel fan and seeing Royce and Hadrian come to life in that format had always been a dream of mine…one that I thought would never occur. Similar to audio editions, graphic novels have significant up-front costs. So it takes someone with a lot of faith in the material to step forward. We were thrilled when DBP asked for the rights, and even more so after we saw their enthusiasm for Riyria as a whole.

Once the rights were sold, it was actually Robin who first suggested running a Kickstarter. The first Dulgath project was so rewarding due to the infectious enthusiasm of contributors, who were able to feel a part of the creation process, that it just seemed natural to repeat that process for the adaptation. Plus, graphic novels have become pretty popular on Kickstarter and that’s probably due to the huge investment required for projects that utilize highly talented (and highly compensated) individuals. 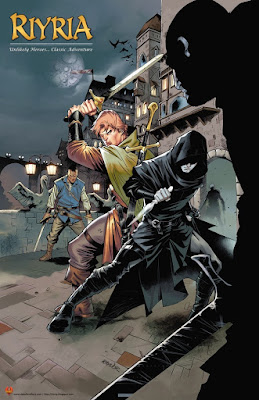 Q] Your book is being adapted by Derek Ruiz along with yourself, so can you describe how has this collaborative experience been? What were some of the major challenges in changing the format?

MJS: I’ve only seen the adaptation of the first few pages so far, which have been great. We’ve only recently funded so I’m sure Derek has either started, or is about to start, the script for the full-length novel. That said, we were fortunate to do a “dry run” as it were by adapting my short story “The Jester” as a comic (which is also offered as a bonus to people who back the Kickstarter). If that process is any indication, I’m sure the collaboration is going to be a fantastic experience. The trick, of course, is to capture much of the text through art, and it is true that a picture is worth a thousand words. There also is a lot of trimming that has to occur.

I’m really impressed with how the iconic Riyria banter can still come through even if every single word isn’t on the page. I’ve been impressed with just how little I’ve had to comment on and that when (on the rare occasion) when I do have some input, how accommodating the team has been to my suggestions. I wouldn’t dream of trying to do the adaptation myself, and I think having someone like Derek, who has such a keen eye for this type of thing, is a huge asset to the project.

Q] Max Raynor is the artist selected for your two volume graphic novel adaptation. How did he come to be involved with your project?

MJS: I’m going to turn this question over to DBP as they were the ones responsible for picking the team. I can say, though, that we had a number of character sketches that were tweaked and modified until I was happy with the depiction of my two favorite rogues. I’ve been pretty vocal about the Orbit covers and how I don’t think they are a good depiction of the duo. I’m so relieved that I don’t have similar misgivings with their graphic novel characterization.

DBP: "We knew that Michael would love Max’s work and that Max would get Hadrian and Royce right on the first try, and he's an amazing artist."

Q] What can your fans & loyal readers expect from this graphic adaptation? Will this be the start of the Riyria graphic novel series?

MJS: Quality is always foremost on my mind with any project I do, and although my bar for the graphic novel was extremely high, DBP and the team they’ve put together cleared it by a mile. So I think the readers can expect some amazing artwork and the ability to “see” my world and my characters in a way that greatly enhances the original story. For anyone who has heard the audio version of the books, it’s a similar experience. When you take my content and augment it with the talent of someone like Tim Gerard Reynolds (the narrator) the experience is raised to a whole new level. Short of a movie or television deal, I think this is the best way to experience my stories through a visual medium. I can’t wait to see the final result. I’m as anxious as my loyal readers and I predict we’re both going to be blown away.

As for whether this be the start of whole series…well I certainly hope so! From a contractual standpoint it gets a little tricky because Orbit owns the graphic novel rights to the six books of The Riyria Revelations and two of three Riyria Chronicle books. But if this first adaptation is a huge success, and I think it will be, then I’m sure they’ll want the other books adapted as well. Going forward, I’m going to retain the graphic novel rights for my work, so I won’t have to involve any parties other than myself and DBP, but the existing contracts are what they are and I’m sure we can work out an arrangement that everyone is happy with.

Q] Please tell us about your partnership with Dabel Brothers Publishing on this collaboration. What led you to them? What was the clinching factor for this partnership?

MJS: It was actually Dabel Brothers Publishing that did the leading. They are huge Riyria fans and were thrilled to find out that the graphic novel rights were available for one of my books. The clinching factor for me was their enthusiasm for the series. They are resolute about brining Royce and Hadrian to a whole new audience, and it’s impossible not to be swept away by their passion. Then of course there is the amazing projects they done in the past and their vision they have for the future of DBP. I feel like I’m getting in on the ground floor of something really amazing. 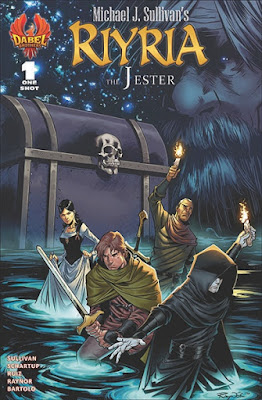 Q] Now that your kickstarter is already funded in record time, what are some of the stretch goals that you folks have in mind for the backers? Can you reveal some of the cooler things to be achieved?

MJS: The first official stretch goal is for $35,000, and it will provide all the backers who are receiving some form of physical rewards with a copy of The Jester comic in print. All backers are getting the digital version of my short story as well, but this will allow people to get a copy to hold in their hands or add to their comic collection.

At $50,000, fans will get two prints. One of Royce and one of Hadrian as if they were drawn by Sherwood Stow.  So, it will be a more realistic painted look type of print with what Stow saw as their true selves.   At $55,000, we will give fans a digital Extras book.  So you will see art corrections, production art, scripts and notes from the whole team.

My favorite thing is probably the $60,000 goal which we are calling "Tales of Riyria."  It will unlock an all new Original tale starring Hadrian and Royce, helping it go into production early. It would unlock a couple special tiers for new buy-ins similar to the "Be a part of the cast" tier in this original story. You would be able to choose if you wanted to be a "good guy" and team up with Royce and Hadrian or be a "bad guy" and be against them. We will give all those who have pledged to this Kickstarter early access to that Kickstarter's early bird specials. All fans will get a promotional poster of the upcoming series as well.

Q] Thank you again for your time, any parting words for your loyal fans and what readers can expect from this labor of love?

MJS: It’s always such a pleasure to be invited to Fantasy Book Critic, definitely a “goto” site for any fantasy enthusiast. Of course I want to extend a big thank you to all backers. As I said, a graphic novel adaptation has been a dream of mine and now it will become a reality. For those who haven’t yet backed the project, I’d say take a look, and if you agree with me about the quality and value of this project, then by all means back it.

The Kickstarter versions will be limited editions and there will be a different cover when officially released, so this is an excellent opportunity to get a collector’s version…and sooner than you’ll be able to get it from the retail chain.