Cover Reveal Q&A: Of Honey And Wildfires by Sarah Chorn (by Mihir Wanchoo)

Today we have the immense pleasure of hosting the cover reveal for Sarah Chorn’s upcoming standalone fantasy volume. Sarah’s debut Seraphina’s Lament was a particularly unique one with its magic system as well as its historical inspiration. Of Honey And Wildfires is an exciting new standalone story and Sarah was super kind to answer a few questions to talk about the world, the story and how Pen Astridge blew her cover expectations right out the gate…..

Q] Thank you for joining us, Sarah, and welcome to Fantasy Book Critic! It’s truly a pleasure for allowing us this opportunity to host this cover reveal. How have you been?

Q] Can you give us an idea of how Of Honey And Wildfires came to fruition? What was your inspiration for this story?

SC: I don’t ever really know how these things happen. I think it’s a mixture of me being weird and the books I read. I tend to only read historical nonfiction books when I’m editing. I kind of flit from subject to subject, whatever interests me at the time. At this specific time, I decided to read a bit on the Wild West. I started reading a book about the gold rush, and then moved on to the early oil industry and settlers and all this and it just kind of… came together from there, I guess. A secondary wild west-esque world started to develop in my mind, complete with corporate interest and battles over resource ownership and etc. Oil and coal became the jumping off point for my magic system. I read a book about Kit Carson, which inspired the development of Christopher Hobson in the book, and his daughter Cassandra was inspired by Kit’s eldest daughter named Adelaide… and here we are.

Q] I would love to hear more details on that gorgeous cover. Who's the artist/designer, and can you give us a little insight into the process for coming up with that incredible piece?

SC: Pen Astridge is the cover artist and the genius is really all hers. I’m pretty much the worst possible person to think of cover art ideas. I think I’m too close to the book, so I just can’t figure out what should go on the cover. For this one, when she asked for ideas or inspiration, I basically had nothing. “Uh… so it’s set in a sort of Wild West. The west has mountains and stuff… uh…” and then I let her run with it. I don’t know what kind of magic she uses to come up with this stuff, but that’s basically all I gave her and she bequeathed me with this beautiful cover. The woman is a wizard. I will never be able to praise her highly enough. I’m really glad she tolerates me.

Q] I believe Of Honey And Wildfires is set in a completely different world than your debut. What drove you to write a standalone story that’s not set in the same world as your debut?

SC: This one is a bit… awkward on my part, but I’ll be honest. Seraphina’s Lament was just so dark, I think I needed a mental break from that world and those characters before I could return to it. I needed a bit of a palate cleanser, if you will. This is a totally different world, and it’s sad and still has its own kind of darkness, but the writing of Seraphina’s Lament just about hollowed me out. I tried to start An Elegy For Hope (The Bloodlands, book 2) and I just… felt too bruised, I guess, so I figured maybe I needed to have this side project going on. A place where I can still tell stories, and explore themes and ideas, but ones that aren’t quite as “here, take my soul and flay it” as Seraphina’s Lament was for me to write.

Basically, I did this for my mental health. I can’t not tell stories. That being said, I needed a bit of a change of pace after Seraphina’s Lament and while this book literally made me sob while writing the last third of it, and I’ve read it and revised it a million times and have yet to make it through without ugly crying, it’s a very different kind of sadness, and there’s more hope here and I think that’s just really what I needed or I would have burned out.

Q] Was the writing process different with Of Honey and Wildfires and did you face any challenges with this genre shift?

Secondly, the book is set in this place called “Shine Territory” which is literally closed off from the rest of the world by this thing called the Boundary, and owned by an outside company. The development of a world in a closed system like this was something I thought would be easy, but ended up being a lot more challenging than I expected. Basically, there’s a whole bunch of people trapped in this one place, completely incapable to leave, at the mercy of outside interests and somehow, I had to figure out how life went on without the outside world touching this place and for whatever reason, it really tied me in knots at times. The outside world and this territory really had to touch JUST ENOUGH, and managing that balance was an experience.

Last, the magic system is… well, I tried to keep it a bit nebulous, for reasons which will become obvious in two of the POVs almost instantly, and that was hard as well. I wanted to lay out all the rules and say, “This is what “shine” is, and this is what it does, and here is why…” and I know people like their magic systems to be clearly defined, but I couldn’t do that because of (SPOILERS) so trying to toe that line between this magic system needing definition and rules and boundaries, and then trying to keep it sort of nebulous and undefined in some respects, was really a balancing act. I’m still not sure if I got it right. 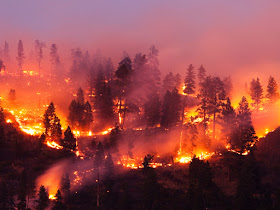 
Q] How did you come up with the title Of Honey and Wildfires? How does it tie with the plot of the book?

SC: This book is a lot of things (I think I’ve learned I tend to work in layers), but thematically, I think this book is an exploration of many different kinds of love. Sometimes love is sweet, sometimes it burns. We tend to think love means romance, but I think we forget, a lot of times, how much of a driving force love between siblings, friends, parents, etc. can be. Sometimes love feels a lot more like a knife. Sometimes the softest touch is the most painful. Sometimes it’s love that breaks you. I told a friend just today, “I kind of take the idea of love and say, ‘Look at how pretty this knife is. I wonder how well it cuts.’”

Anyway, there’s a quote I put on the first page of the book, which is where I actually got the title from. I think it kind of shows strength in ways that we don’t typically think of it (it’s also just a gorgeous quote) and I really think it fit the tone of the themes I was running with for the book. It is:

Just because you are soft does not mean you are not a force. Both honey and wildfire are the color gold.

- Victoria Erikson, Edge of Wonder: Notes on the Wildness of Being

Q] Your book has a real interesting magic system as you had mentioned your research on twitter. What can you reveal about the magic system that you have created? What are some of its unique features?

SC: I have a whole long blog post about this on my website. Basically, the magic system is inspired by oil and coal. Specifically, the mid-1800’s oil and coal industry. In the book, a bunch of settlers traveled west to try their luck out beyond the borders of the Union. One guy dug a well on his property, looking for water, and ended up striking shine.

Shine comes in oil or rock form (rock is more expensive, and lasts longer, but is harder to get and relies on child labor). Shine can be used for just about anything. If it’s rubbed on thread, the cloth that uses that thread will never tear. If it’s dabbed in a wound, the wound will heal faster. Put some in water, and it will cool or warm as you will it. Use shine rocks to light a fire, or shine oil in a lamp, and the flame will never flicker or go out. Three shine rocks can be used to power trains for years and years. Guns shoot shine, not bullets. Since this is a closed system, food has to cross the Boundary and is often rotten by the time it gets in, so shine rubbed on rotten food will bring it back to health and prolong its shelf life. On the flip side, there’s “shine addiction.” People who drink this stuff get addicted to it, totally strung out, and end up dying an early death. Think heroin.

A lot of this stuff is based in history. Oil actually WAS used as medicine. Coal was a fantastic find because it packed so much energy in those rocks. I just made my shine rocks, more powerful and last a whole lot longer. The oil and coal industry really drove technology forward in leaps and bounds, and I tried to take the essence of that, and the fight over control of the resources (corporate interest and the like), but sort of twisted it to be a bit more… mystical.

Q] What do you hope your readers take away from this book?

SC: I mean, I guess my minimum would be, “Wow, reading this book wasn’t a terrible experience.”

Q] Thank you again for taking the time to chat with us, Sarah. When can readers be able to read Of Honey And Wildfires? Anything else you have going on right now that you'd like the world to know about?

SC: I’m aiming for a March 31st release date right now. On the side, I’m starting to write An Elegy For Hope, which is the book after Seraphina’s Lament. I’m also writing Glass Rhapsody, which is the next (standalone) book set in this world. 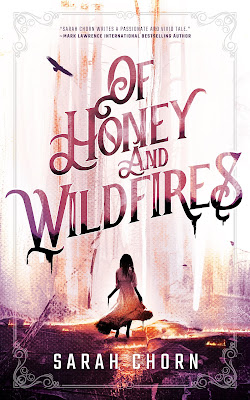 Pre-order Of Honey And Wildfires over HERE

OFFICIAL BOOK BLURB: From the moment the first settler dug a well and struck a lode of shine, the world changed. Now, everything revolves around that magical oil.

What began as a simple scouting expedition becomes a life-changing ordeal for Arlen Esco. The son of a powerful mogul, Arlen is kidnapped and forced to confront uncomfortable truths his father has kept hidden. In his hands lies a decision that will determine the fate of everyone he loves—and impact the lives of every person in Shine Territory.

The daughter of an infamous saboteur and outlaw, Cassandra has her own dangerous secrets to protect. When the lives of those she loves are threatened, she realizes that she is uniquely placed to change the balance of power in Shine Territory once and for all.

Secrets breed more secrets. Somehow, Arlen and Cassandra must find their own truths in the middle of a garden of lies.